After yet another dismal performance last week Inter welcome visitors Bologna. The last time they faced each other both teams got a score of 1-1 giving each side a point. Inter have won four of the last six matches with Bologna who are in the middle of the table look to move up in the league standings while Inter look to get their first win in seven matches and to secure the final Champions League spot which is becoming harder since Roma who are also in the hunt of that position are behind them by just a point who look to over take them. Things Inter will need to do is keep their chances limited as they’ve been struggling keeping players from creating chances. Bologna are good at counter attacks and keeping the ball away from their opponents and they will do anything to keep the ball away from Inter. Also they need to make sure to cover them on defense because Bologna are good at stealing the ball away from their opponents. This match would start red hot as Inter scores two minutes in with a goal from Eder. Later in the half with twenty minutes to play Bologna scores a goal of their own with Palacio getting the equalizer. The half ends with both sides having a score of 1-1. At this point Inter leads in taking chances. The second half things heat up as both sides look to get all three points. With twenty nine minutes left to play Inter steps up and gets another goal coming from Karamoh putting them up 2-1. Both sides continued opening chances with Inter looking to add to their lead while Bologna look to equalize yet again. But the match would end 2-1 as Inter get their first win of 2018 and stopping their losing streak in it’s tracks.

This week Inter change their formation along with player and position changes. This week Inter switch to a 4-3-1-2 formation. In goal is third in clean sheets Handanovic who has nine clean sheets this season. On defense on left back is Cancelo who started in this position from last week. On left and right center back Miranda and Skriniar who have started together majority of the campaign. Skriniar has three goals this season after signing with Inter at the start of the season. On right back D’Ambrosio who has one goal and two assist this season. Up in front of the defense is the center mid field. On left mid is Karamoh who gets his first start of the season. On center mid and right mid is the dynamic duo of Vecino and Valero who share three goals between themselves. Moving to center forward is Brozovic who normally plays right wing in the 4-2-3-1 formation. Up top strikers Eder and Perisic who is Inter’s secondary goal scorer. This is a solid lineup who is capable of defeating Bologna but they’ll need to keep an eye on Di Francesco, Palacio and Gonzalez who are Bologna’s main goal chance takers. But but based on Inter’s recent performances they might get yet another draw but they are capable of winning this match. 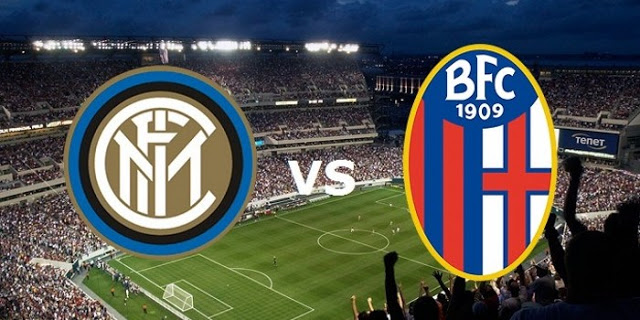 After the break this match resumes the first thing Inter would do is make their first substitution of the match when Lopez comes on for Miranda. A few minutes in Inter gets their first chance of the half D’Ambrosio hits the post after a header from a close distance this comes from an assist from Vecino with a headed pass following a corner. Minutes later Perisic takes a header of his own from the center of the box is blocked. A minute later Bologna’s first chance of the half comes from Poli taking a right footed shot from the box is saved in the lower right corner of the goal. Right after Perisic takes another header from the center of the box goes to high. Inter in this half so far have really stepped up and created more chances and keeping Bologna’s chances to a minimum and making sure they don’t get any further momentum. Brozovic later on takes a right footed shot from the center of the box misses to the right. Near the sixty minute mark Inter make their second substitution of the match as Rafinha finally takes the pitch for the second time while being at Inter as Brozovic goes off the pitch. In the sixty third minute Inter go up on Bologna with another goal from Karamoh with a left footed shot from outside the box to the lower left corner with an assist from Rafhina. This gives the home side the 2-0 lead. Several minutes later Karamoh takes a right footed shot from the right side of the box is saved in the center of the goal. After the seventy minute mark Inter make their final subbing of the match as Gagliardini replaces Karamoh. With three minutes left in play Bologna look to try and even things up yet again as Palacio takes a left footed shot from the left of the box is saved in the lower left corner. After that it was the final real chance of the match as both sides would mostly play a game of keep away the remainder of the match. The match concludes with Inter winning the match 2-1. This is their first win of the year and first win in seven games which to fans is a breath of fresh air despite the win being sloppy and lucky.

Besides being a sloppy match this win was much needed. Inter are doing slightly better in keeping teams chances limited but still has room for improvements.They need to continue working on defense and keeping coverage on the opposition. Also they need to stop letting mistakes get to them and to make sure they don’t make any gaps that opponents can get through and create chances. But on the plus side a win is a win at the end of the day. The man of the match is Karamoh who did a great job this match and look forward to seeing what he can do. That and he gave Inter the winning goal. Next match Inter travel to Luigi Ferraris to take on 12th place Genoa. The last time these two faced each other at the start of the season Inter would go on to win the match 1-0. This may end up in a draw but can go in Inter’s favor once again of they get lucky. Until next time FORZA INTER.

Man Of The Match: Yann Karamoh (1)