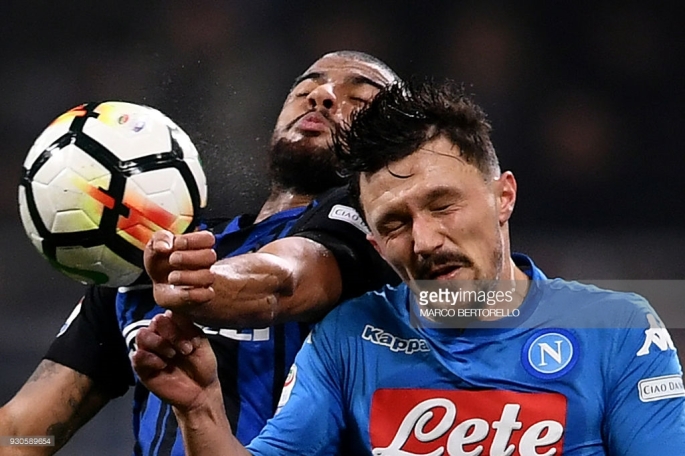 After beating Benevento two weeks ago Inter take on top of the table leaders Napoli. Napoli. Napoli are looking to get their next victory after suffering their second loss of the season against Roma.  Last week Inter were to take on their derby rivals AC Milan but due to the sudden passing of Fiorentina captain Davide Astori all matches that day were postponed as a sign of respect and so that players and fans could mourn this tragic loss. My thoughts and prayers go out to the club and family during this rough time. In the past six meetings between these two teams have mostly ended in a draw. But winning wise the leader is Napoli.  Things that Inter will need to focus on if they have any hopes of beating Napoli is keeping their chances limited because when they get chances they do a great job finishing them and getting points on the board. They need to be able to comeback quick as they are good at maintaining the lead also if they are losing they do a great job from losing situations.  Napoli play possession style so they also need to focus on getting the ball away from them often so they don’t get the chance to score.On top of that they need to keep the ball in Napoli’s half as they are able to control the ball in the opositions half. The one thing Inter can do is air balls as Napoli are weak in arial duels. One last thing Inter will need to do is keep the wings covered well as they are strong at playing down the wings. Inter also need to keep a winning mentality especially when they make mistakes and they let it get to them which is costly because at that point they let the match get away from them. If they do these things they can possibly come away with a draw. In the first half would be a slow half with both sides have limited chances on net despite Napoli dominating the possession and taking more of the chances on net. They both would hold each other to a draw at the half.  The score at the half is 0-0. The second half both sides would yet again have limited chances and Napoli continues to dominate Inter both in possesion and chances but Inter hold off Napoli as this match ends in a 0-0 draw. This result may put Inter’s chance of a Europe League spot in jeopardy as their rivals sit four points behind them and can over take Inter if they’re not careful.

This week Inter stick with the 4-2-3-1 formation but there is some player switches to mention.  In goal is none other than main keeper Handanovic.  On defense is key defender D’Ambrosio on left back. On left and right center back the dynamic duo of Miranda who has been rumored to be for the exit door at the end of the season and Skriniar. Capping them off on right back is Cancelo who is also linked with a potential transfer as well. On defenive mid feild is Brozovic taking Gagliardini place on the left while Gagliardini moves to the right replacing Vecino from two weeks ago.  On the attacking side of things on the left wing is secondary goal scorer Perisic who has been struggling to find the back of the net has of late. Getting his second start of the season center mid and Barcelona loanee Rafinha and capping them off on right wing Candreva.  Up top getting his first start in four weeks the Inter scoring beast striker Icardi who has also been struggling to find the back of the net himself. This is a solid lineup but one thing that should be swapped is Cancelo and D’Ambrosio has D’Ambrosio is stronger on the right as Cancelo is with the left. But overall this is a lineup that is able to come away with at least a draw. Players that Inter need to keep eyes on are Mertens, Hamsik and Insigne who are their main goal chance takers. When they get the ball they are able to maintain the game in the oppositions half. Also they need to keep an eye on their defense because they can cut through the offense like butter. If they focus on these things they can possibly get a draw.

This is the best result Inter could hope for has they got outclassed in every way possible tonight. Defensively they were lucky Napoli’s chances didn’t get in the net since Napoli were getting chance after chance to score but shout out to Handanovic who held his own out there and dis everything in his power to make sure Napoli didn’t score. On offense limited chances and very little possession unexceptable. With Europe hanging in the balence both sides need to step up or else it maybe game over for their chances at getting that spot.  The man of the match easily goes to Handanovic has he was consistent start to finish and was the only one who really did anything of importance in this match. Next week Inter go on to face Sampdoria.  The last time these two teams squared off Inter wins the match 3-2 but this time around it can go either way as Inter after week sixteen have been in poor form even agaisnt relegation sides instead of thrashing them like they’re capable of they’ve beaten the mon the smallest points possible instead of seeing the usual massacre of 7-1 matches.  But anyways hopefully they turn it around asap or else the rest of the season could be disaterous. As always until next time FORZA INTER.