Luigi Ferraris
Genova Italy
After a draw against Napoli last week Inter travel to take on 8th place Sampdoria. Last time Inter played Sampdoria was at home last year in the first half of the Campaign where Inter would win 3-2. But now they face Sampdoria at home where they thrive and visitors have trouble beating them there. Also Sampdoria have a good squad as well and are no pushovers despite being in the middle of the table. Sampdoria have won three out of their last six matches against Inter and they’ve only had one draw in their previous six meetings. Sampdoria look to move up in the league table while Inter look to secure a Champions League spot and it’s tight especially when Lazio are on their heals looking to secure the spot themselves. Inter need to keep an eye on Sampdoria they are good at taking chances and finishing them especially when they’re playing at home and are a force to be reckoned with there. So they need to prevent them fro taking chances. Also they need to make sure they can get past the Sampdoria defense to take chances of their own and to be able to capitalize on those chances which is where Inter have been struggling as of late being able through on finishing goal chances. Also they need to keep a positive mentality throughout the whole match and not let any mistakes get to them because majority of the time they lose motivation when they make a mistake and causes them to make more mistakes. So if they do make a mistake they just need to breathe and move on especially with only a few matches left in the season so every match counts and will determine where they finish and Inter are hoping for the final Champions League spot at worse case they at least can secure a Europe spot. If they focus on these things they can possibly win this match. In the first half both sides open up multiple chances but for the first time in a long time Inter would thrash Sampdoriain the first half going up 4-0 with a goal from Perisc and a hat trick from the Inter scoring beast Icardi. At the half Inter would dominate 4-0. In the second half both sides would continue opening chances but Sampdoria could not capitalize on any of them. To add insult to injury Icardi scores one more goal making the score 5-0. With Inter being so far ahead Sampdoria could not catch up and this match ends with Inter dominating 5-0 which is their first thrash score of the campaign.

This week Inter stick to the 4-2-3-1 formation with only one position switch from last week. In goal is tied for third in clean sheets Handanovic. On defense is the usual cast of characters on left back key defender D’Ambrosio. On left and right center is Miranda followed by Skriniar who has mentioned that he seeks to hopefully stay the long term for Inter and becoming a vital staple in their defense. They are capped off by right back Cancelo. On the defensive mid is where they make the position switch Brozovic and Gagliardini who would swap sides from last week. On the attacking side of things on the right wing secondary goal scorer for the Nerrazuri’s Perisic who has been on a goal dry spell as of late and who is looking to put his name on the map once again. In the center getting his third start Rafinha who is on loan from Barcelona until the end of the season where then it will be determined if he stays with Inter or goes back to Spain. On the right wing is none other than Candreva. Up top is the Inter scoring beast who himself has been on a goal dry spell of his own and who also looks to get his name back out there again to. This is a very strong lineup who is very capable of winning this matchup. If they focus they got this one in the bag. However they need to keep an eye on these players who can be a threat to them if they’re not careful the are Torreia, Ramirez and Ferrari not only are they fast and are great at taking chances Ferrari is a great defender and can cut through a offense like butter if he’s having a good day. They need to keep these players in check or else it can spell disaster for Inter. But overall they can easily win this match.

This match was a massive win for Inter as they continue their hunt for a Champions League spot. This is the Inter fans have been missing seeing them put the hurt on their opponents. So to them this is a site for sore eyes. They played their heart out and left everything on the pitch which is how they need to play the rest of the campaign and to help determine where they finish in the table and if they’ll get a Champions or Europe League spot. The man of the match definitely goes to Icardi he was on fire the whole match and was playing very consistently and congratulations to him on getting 100 Serie A goals. Next week Inter take on visitors Hellas Verona the last time they played each other Inter won 2-1 and they look to do the same again and get another much needed victory. While Verona look to get any points possible to hopefully escape the dreaded relegation zone. If Inter can take the momentum they had in this match this match will be another possible Inter win. Hopefully the momentum carries over because they need all the points possible. Until next time as always FORZA INTER.

Man Of The Match: Marco Icardi (5) 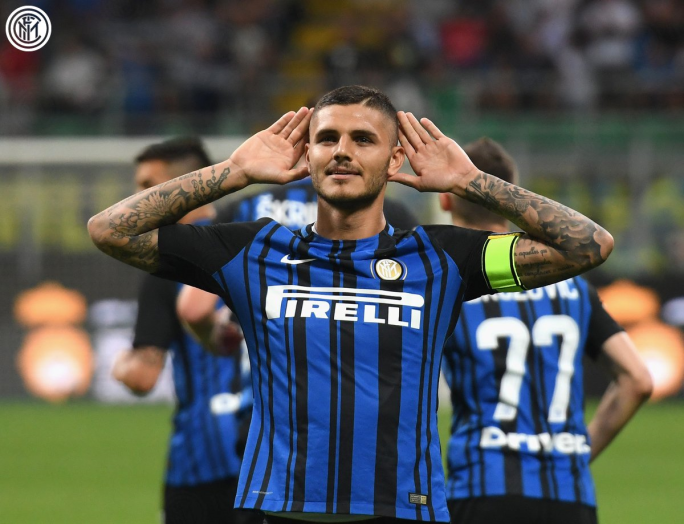