After two back to back wins Inter face one of their first challenges since three weeks ago when they took on then leaders Napoli where they scathed by with a draw. By the way this match is a makeup match because this match was to be played a few weeks ago but on the day of the match Fiorentina suddenly lost their captain Davide Astori who is still missed by players and fans everywhere. This week they face their noisy neighbors in another installation of the Derby Della Madonia their rivals AC Milan. The last time these iconic teams squared off Milan in the Coppa Italia would go on to win that match 1-0. This result gave Inter another loss after losing to Udinese and Sassuolo in Serie A competition. In this match and every match here on out is crucial on where Inter finish this season as they continue to hope and work to get that final Champions League spot while their rivals hope to get the points and overtake Lazio to get into the Europa League. Also Inter fans hope to seek payback with a victory after it is rumored that Milan fans went and defaced a Inter Milan mural that was going to be unveiled to commemorate Inter’s anniversary. So in this match there is going to be no love lost. Things Inter will need to keep an eye on is that Milan take many goal chances and they’ll need to make sure they keep those chances limited stopping Patrick Cutrone and Suso will be their biggest task. Because when they get the lead they do score goals their defenders do a great job to help maintain and protect that lead which has been a problem for Inter. They can exploit them by drawing individual error as Milan struggle to avoid those which can be used in Inter’s favor and they also struggle to defend against skillful players which Inter can use to their advantage as well. This is also kind of an even based matchup in way of both teams playing style they both play possession style football and they both like to control the ball in their opponents half. One thing that Milan will do is exploit one of Inter’s weaknesses is using the offside trap to draw them into offside often which is a problem for Inter in way of scoring chances. This should be a even based match all together but can go either way especially in highly anticipated derby matches. In the first half Inter would dominate in scoring chances and in possession as well despite holding each other to a stalemate. The half ends with both sides with a score of 0-0. In the second half both sides would continue opening chances but this match with both of them getting a point. This match ends 0-0.

This week Inter stick with the 4-2-3-1 formation along with the same lineup as last week. In goal is none other that Samir Handanovic who is now tied for second in clean sheets along side Roma keeper Alisson. The keeper who is above them is Napoli keeper Reina. On defense on left back is D’Ambrosio who is continuing to be a crucial part to Inters defense and who is one of Inter’s more consistent defenders. On left center back is Miranda and next to him on the right center back is Skriniar who’s contract is up at the end of the season hopefully Inter will sign a contract extension has he’s been a great addition to their defense. Capping them off on right back is Cancelo. On the defensive mid Inter put out the dynamic duo of Brozovic and Gagliardini who have been working very well together over the past few matches. On the attacking mid on the left wing secondary goal scorer and tied for third place in assist is Perisic who has finally come back from his goal drought which is definitely good thing as the matches now get more serious on when it comes to where the team will finish so every goal and point helps. Next to him in the center is Barcelona loanee Rafinha who himself has been a great addition to the team. On the right who is also tied for third along side teammate Persic in assist is Candreva. Up top is the Inter scoring beast and overall top scorer for Inter striker Icardi. This is a solid lineup but Milan are no pushovers. Players that Inter will need to watch out for are Cutrone, Kessie, Bonaventura, and their defender Rodriguez. The first three players mentioned they are fast and are great goal chance takers and will do anything to keep the ball away from Inter. So they need to keep the ball away from them and make sure they don’t get a chance to score. While Rodriguez is good at taking a teams offense apart so Inter need to keep him in check as well. The best Inter can hope for is a draw.

This was a well earned point for Inter though the three points would have been better but every point counts at this point. Inter did a great job creating scoring chances but they still continue at times fail to be able to capitalize on those chances which is one area they can continue to work on. They also did a great job keeping Milan’s chances limited and did a overall good job on keeping the pressure on them and not letting them have any breathing room. Overall they had a great performance today. But there are a few things however they can continue or need to work on. First of all as mentioned earlier being able to capitalize on goal chances when they do take them. Next they need to work on not being caught offside when taking goal chances. If Icardi wasn’t offside they could’ve possibly had the full three points but the same could be said about Cutrone . So they need major improvement in that area. They have improved in not letting their opponents have breathing space but they can continue to work on this area as well as they were struggling with that on multiple occasions this season. But anyways a point is a point and it was a well earned one. The man of the match goes to Brozovic who did a great job creating chances and helping in assist situations. He was one of a the few consistent players today and he’s been doing a great job the past few matches and is slowly getting better with every match. Next match Inter travel to the Grande Torino to take on middle of the table team Torino. The last time Inter faced them they would split a point as that match ended 1-1. Inter and Torino in their last six matches have two wins a piece so this match can go either way. Until next time FORZA INTER.

Man Of the Match: Marcelo Brozović (2) 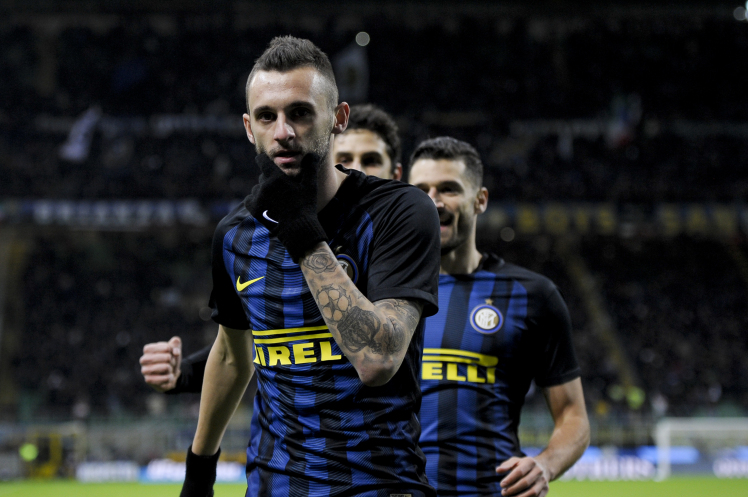