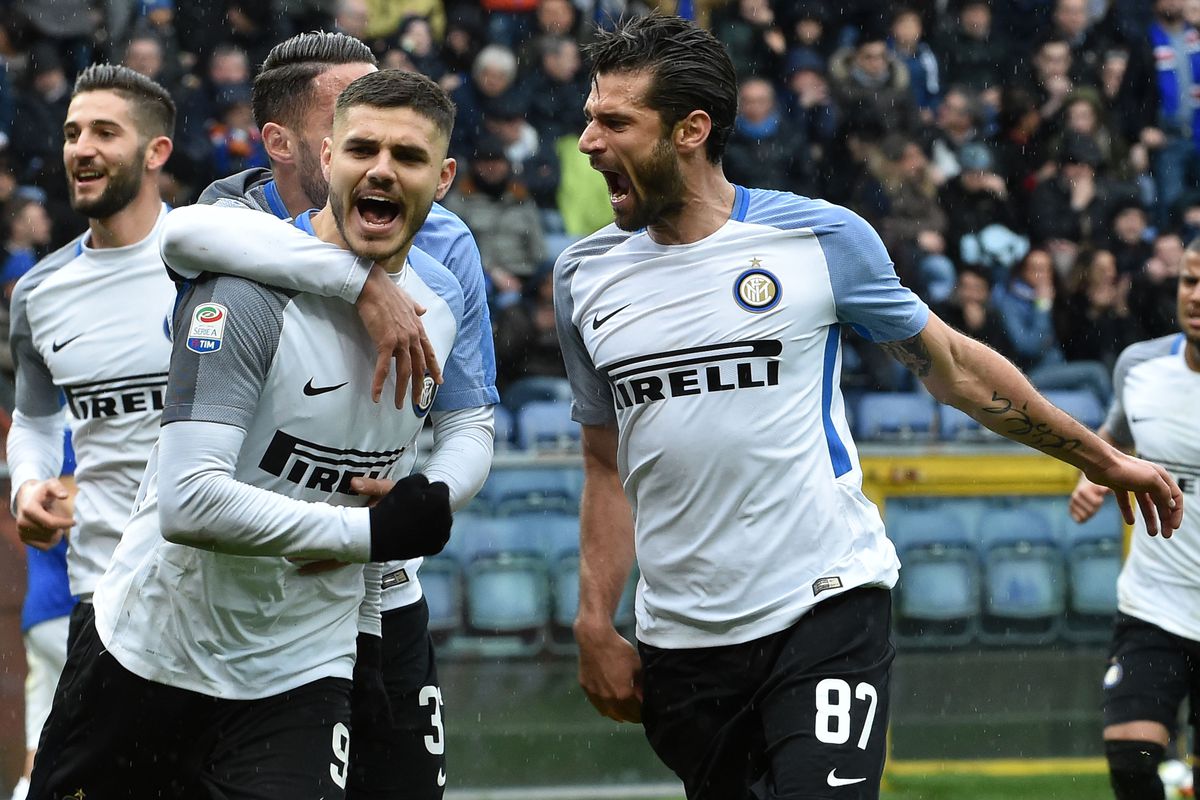 After losing to Juventus last week Inter travel to Udine to take on fourteenth place Udinese. Back in the first half of the season Udinese would hand Inter their first loss of the season with a score of  3-1 . With that Inter would go on a seven match downward spiral where they went from first in the league standings and title contention to droping to fifth in the standings. Between that time Inter have found themselves bouncing between fifth and third place looking for that final Champions League spot. But with last weeks crushing loss to Juventus and Lazio winning their match the next day may have just slashed those hopes. If anything Inter are now gaurenteed a spot in the Europe League. In this match Inter will try and get as many points possible to comeback and secure the final CL spot and hope Lazio screw up though it’s not likely has they have a very solid four points they can get before their final meeting with Inter in the final match of the season. Inter will need to win their final three matches and they face two solid teams despite those teams positions. While Udinese look to move up in the table to get a better finishing position. Udinese have lost their last five matches at home this season. In their last three away matches against Udinese Inter have scored a average of two goals. Overall Inter are very domiate against Udinese with winning five out of their last six matches against them. There are no real strengths to mention about Udinese but they do have a few things they should keep an eye out on though. First they need to keep their chances limited despite being in fourteenth place they are a strong team and are to not be underestimated. But they do struggle to protect the lead when facing stronger opponents. Also they have a difficult time defending against skillful players like D’Ambrosio for example. They also struggle to defend against counter attacks along with struggling to defend down the wings and set piece situations. Their playing style attack wise is they like to take lots of shots and use long balls. Defensively they rotate their players and the do well defending their own half. Based on all this Inter can win this match but Udinese is a team not to fall asleep on the worst/best case scenerio is a draw. But with the final matches of the season every point counts. In the first half both sides created multiple goal chances but Inter dominated the half with three goals from Ranocchia, Rafinha and Icardi. Giving them a good cushion lead and the half ends 3-0. In the second Inter continue their dominance and add to their lead with a goal from Valero. Udinese would try and get a consolation point but Inter were just to strong and the match end 4-0 as it comes at a crucial time as the hunt for the final CL spot continues. 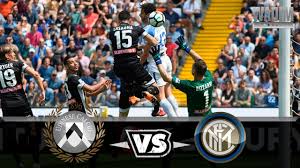 This week Inter stick with the 4-2-3-1 formation but there is two player switches that need mentioning. In goal is none other than Samir Handanovic who is second in clean sheets with Reina of Napoli having one more clean sheet over him. On defense on left back replacing D’Ambrosio is Dalbert who is getting his first start in quite sometime. In the center is the duo of Miranda and Ranocchia who is getting his fisrt start in quite sometime as well. Capping them off on right back and a player that Inter should consider signing at the end of the season Cancelo. On the defensive mid is Brozovic and Valero. On the attacking side on the left wing is secondary goal scorer and ninth in assists is Perisic. In the center is Rafinha who Inter should also sign he is replacing Vecino after receiving a red card in last weeks Juventus match. On the right wing sharing the tie for ninth in assist in the league is Candreva. Up top is none other than the Inter scoring beast Icardi who has a total of twenty seven goals this season. This is a solid lineup but they should’nt underestimate Udinese they are a great team who can catch you off guard if you fall asleep on them. Players they need to keep an eye out on is Danilo on defense and Lasagna, De Paul and Adrian who are their clubs goal chance takers and who will do anything to get their boys the three points. The worst case that can happen is getting a draw but anything can happen. 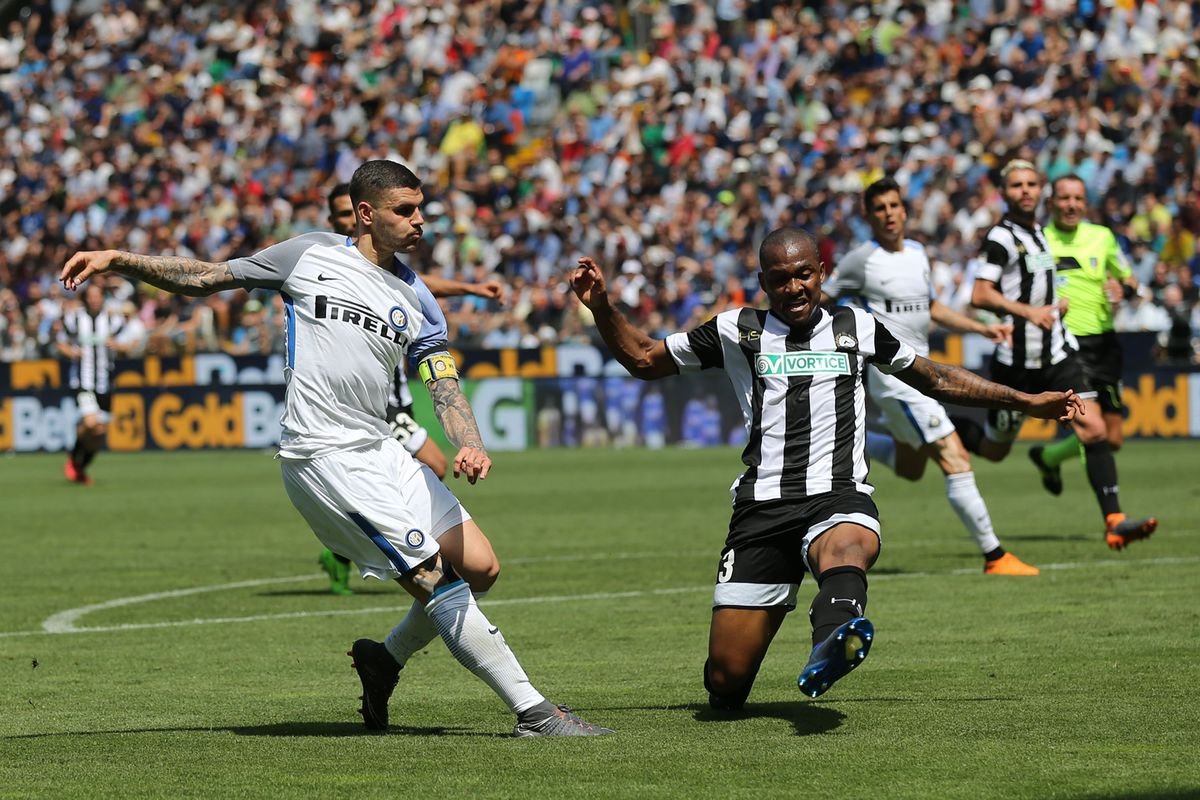 Icardi makes it 3-0  with his goal just minutes before halftime.

This was a much win as the final CL spot is still for the taking. Inter did a wonderful job to shut down Udinese offense and did a great job cutting through their defense. However they still need to work on not being caught offside often. The last two final matches are critcal as they want to get as high in the table as they can. Out of the last two matches there are a resonable four points they can get. Due to a Lazio draw later in the day a point now seperates third and fourth is a point but Inter still trail 3rd place Roma by four. Inter need to win their next match and hope that Lazio lose to Crotone. Then in their final match with Lazio at least get a point out of that match to even secure fourth. But realistically in my opinion they’ll get in Europe. But anything can happen especially in the last two matches. The man of the match goes to Ranocchia even though he played defensively the rest of the match his opening goal set the pace for the remainder of the match. He did a great job defending the ball and making sure Udinese didn’t have any breathing room. As a team overall they did a great job today. Next week Inter take on twelfth place Sassuolo in their final home match of the season. The last time they faced off Sassuolo gave Inter their second loss of the season as they won the match 1-0. Hopefully Inter can get the win this time around and get those three points. But as usual worst case is they get a draw. As always until the next one Forza Inter.

Man Of the Match: Ranocchia (2) 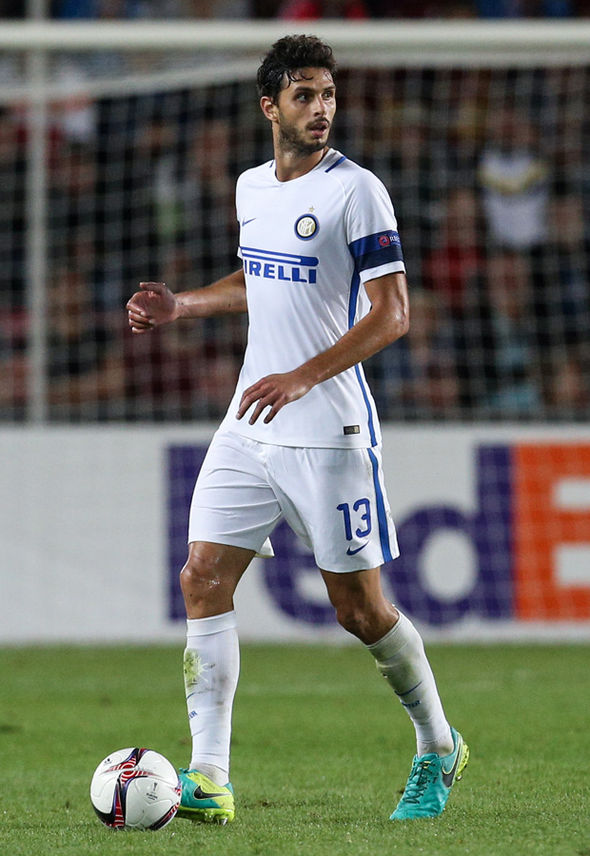