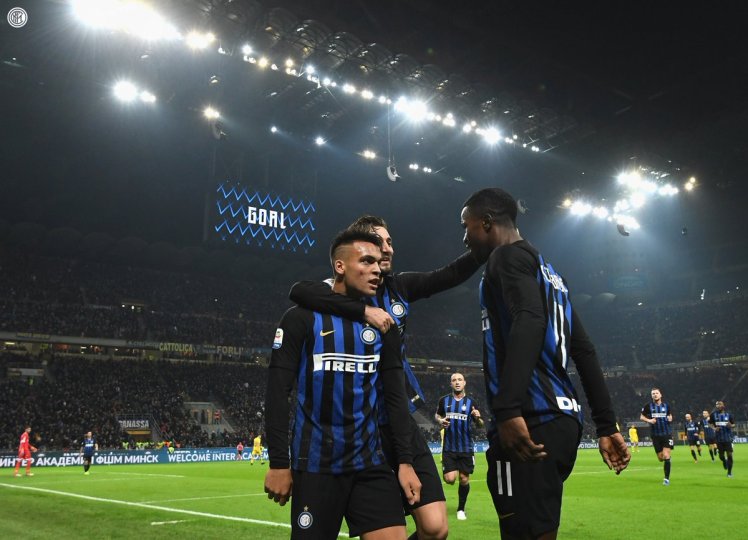 After the international break Inter took on relegation and promoted Frosinone. Going into the match Inter were taking a crushing loss against Atalanta in a complete antihalation as they lost the match 4-1. On the other hand Frosinone took a draw against Fiorentina. The last time they faced each was back in the 2015-16 season where Inter won the season sweep beating them both times and later that season Frosinone got relegated which maybe the case again this year if they’re not careful. Inter needed all the momentum they could take as they face Tottenham in the CL later this week. While Frosinone look to get out of the relegation zone. In the first half Inter took advantage s they took the possession of the ball early. They also got chance after chance as Keita scored early in the half with a shot from the center of the box as Inter got a 1-0 lead. They continued there pressure on Frosinone offense and letting them get very limited chances. In the second half Inter continued their dominances and scoring two more goals one coming from the bull Lautaro Martinez giving Inter a 2-0 cushion. With eight minutes left in play Keita put the nail in the coffin as Inter go on to win the match 3-0. This puts them back in the winners seat as they take a huge win into their match against Spurs.

Keita has struggled most of the season. In the beginning his passing was sloppy and he was all over the place. Also he had nothing to really show for being at the club. When it was stated he was being put in the starting lineup most supporters were like oh no this has disaster written all over it as he hasn’t shown his potential and they didn’t want another mediocre performance out of him. But this match finally brought him out of his shell. We saw him step up where it was needed as Inter were resting their key players for their CL match. He helped win this match for Inter as he scored two goals and helped with an assist which is a step in the right direction for him but he still as room to improve but if he does better he may be one of the loan players that the club may sign after the end of the season.

Frosinone have been struggling this season to get out of the relegation zone. They struggle especially against stronger teams where they have a hard time getting those chances in. They also fail to capitalize on the chances they do take. Defensive wise they are good at blocking some of their shots along with making sure players miss the goal. They also had a few key players out with injury or suspensions which can cost teams valuable points. In this match all these things really showed. If they don’t fix these issues they just might be heading back to Serie B at the end of the campaign.

As most people know Inter are a strong side at home. This has shown after a few hiccups earlier in the season regarding that. Inter when they are at home they seem to come alive. More than likely it comes from the supporters who provide the energy the team needs to get through the match. Also away it is more difficult for them to win depending on the team like against Juventus and Sassuolo who dominate at home. Especially Sassuolo where they have yet to win in their home turf. This is one thing that helped them this match was being back on home soil and having the fans back them.