Following another boring international break Inter welcome visitors recently promoted and relegation side Frosinone who sit 19th in the league table. Inter are coming off a stinging loss against Atalanta before the break in a 4-1 blood bath. Frosinone on the other hand are coming off a draw against Fiorentina. The last time these two faced off was back in the 2015-16 season where Frosinone got promoted only to get relegated which may seem to be the case this season as they sit only three points away from safety. Inter during that time won the season sweep against them beating them both times. There is no real key strengths except that when they get the lead they do a great job of maintaining that lead. But other than that Inter have a boat load of weaknesses they can continue to exploit. Such as they struggle to do well defending the ball in almost all areas such as long shots, skillful players, counter attacks etc. They will also struggle in aerial duels and will struggle to maintain possession of the ball which is where Inter succeed in keeping the ball and capitalizing on scoring chances. But play wise Inter will need to beware of their former nemesis being caught offside as Frosinone will use that to their advantage to catch them off guard. This match as it’s Inter’s turf will probably get a easy win as they’re at home and are a strong side but hopefully they put the Atalanta loss behind them and focus on the match ahead. In the first half Inter show their strength as they took hold of the possession early and also took hold of the creating scoring chances game as well. Early in the half Keita Balde scored his first goal of the season giving Inter a 1-0 lead. In the second half Inter continued their pressure on Frosinone as they still maintained their possession. Lautaro scored close to the midway point of the half. But before the half would end Inter put the nail in the coffin as Balde scored his second goal of the match with that Inter win the match 3-0 and putting them back in the winners circle.

Inter this week will stick with the 4-2-3-1 lineup. But there are a few major changes mostly in the midfield and in the position of striker as they’re trying to rest their major players ahead of their match against Tottenham in the CL later this week. In goal is the main man himself Handanovic. On defense on left back is Asomah who has become a anchor for the defense. In the middle the duo of Skriniar and Devrij who have helped the defense as well. On right back is top defender D’Ambrosio who has had a hit and miss season this year. On defensive mid replacing Brozovic due to a suspension after a red card against Atalanta is Valero tagging up with Gagliardini. On the attacking side of the spectrum on left wing is Keita who has yet to prove himself this season hopefully he can prove his worth in this match. In the center is the ninja Radja who has added a lot of depth to the once was lacking midfield. On the right wing is Politano who in my opinion would be a great permanent fixture for the club after his loan is up. On the striker position is the bull Martinez. This is a solid lineup but anything can happen.

After the player took their positions this match gets under way. Inter looked to strike early as D’Ambrosio from the center of the box is saved in the lower left corner. A moment later Radja misses a shot from outside the box. Inter are taking advantage early on not letting Frosinone a chance to get anything going. Minutes later Keita takes a shot from the right of the box but it gets saved in the top right corner. At the ten minute mark the dead lock would end broken as Keita lands a left footed shot from the center of the box to the lower left corner as Inter take a 1-0 lead giving Keita his first match of the season. Fifteen minutes in Frosinone get their first chance of the half as Andrea takes a left footed shot but his attempt would be blocked. After the twenty minute mark Martinez gets a shot from outside the box is saved in the lower right corner of the goal. Minutes later Frosinone get chance number two as Daniel takes a header from the center of the box but his shot goes to the right. Inter are doing a great job keeping them on lock down and keeping the ball in their half of the pitch. With fourteen minutes left in the half Ramen of Frosinone takes a right footed attempt but it is saved by Handanovic in the lower right corner. Politano with six minutes left in the half Politano gets a left footed shot blocked. Three minutes to go Radja misses a right footed shot from outside the box as the ball goes to the right of the goal. In the final minute of the half Inter would try and add to their small lead as Radja takes one final attempt with a right footed shot from outside the box it is close to going in the goal but it misses slightly to the right and with that the half ends with Inter 1-0 up. If Inter can maintain their pressure on a weak Frosinone side they should have no problem winning this match. 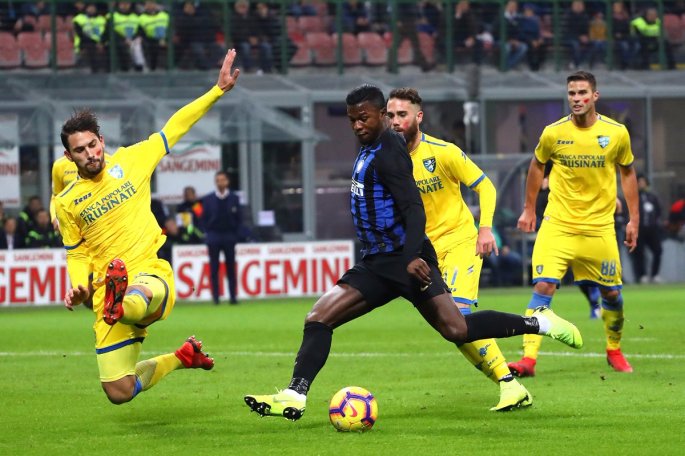 This was a massive win as they can carry that momentum into their CL match this upcoming week. This proves they have come along way as they shook off the loss they sustained at the hands of Atalanta whereas in the past they would’ve let it mess with them and cause them to go on downward spirals falling in the table. This time that’s not the case. Also in this match some players have finally stepped up in a big way such as Keita who finally got two goals for the season and is finally coming alive. Also Martinez as done a great job stepping up as well. The man of the match is Keita who helped create scoring chances and helping with assist and helping lead the team to a much needed victory. Next week Inter take on Roma at the Olimpico and who sit in seventh position. The last time these two teams faced off they would end in a 1-1 draw. This match can go either way as Roma are struggling this season but the they are strong at home if anything the worse they can get in this match is a draw. As always until the next one FORZA INTER.

Man Of the Match: Keita Balde