San Siro
Milan Italy
Before Serie A action returns next weekend Inter take on Benevento from Serie B in a Coppa Italia matchup. The last time these two sides faced off was last season when Benevento was in Serie A Inter won the season sweep with two wins against them. Inter sit in third place in the Serie A table while Benevento sit in sixth in the Serie B standings. This is the first Coppa Italia matches since last August before the season started. Overall Inter going into this match are the clear favorites to win as they’re the stronger side. Inter in this match will need to take advantage of the match early on taking the ball early and creating as many chances as possible. But they need to be able to finish those chances which is a thing they have issues with. Benevento here have a mountain to climb. They not only will need to worry about chances of their own but they’ll need to figure out how they’ll keep the ball away from Inter as they play possession style football. They also will need to do a better job defending the whole pitch as Inter will utilize it to their full advantage. Inter have been a good team at home and they should have this match in the invisible bag. In the first half Inter dominated the first half as they took hold of the possession and scored three goals one a penalty scored by Icardi and the other goals coming from Candreva and Dalbert. This put Inter up 3-0 at the half. In the second half Inter maintained possession and dominating scoring chances. Inter would go one to score three more goals two from Martinez and another from Candreva. But Benevento wouldn’t let this match be a total shut out as Insigne and Bandinelli scored a goal each to get some consolation goals but the damage was already done as Inter roll over Benevento 6-2. 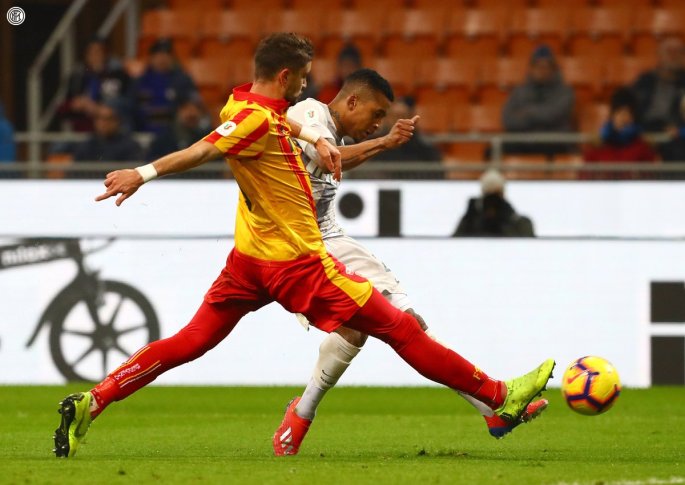 In this match Inter revert back to the 4-2-3-1 formation. In goal is a player who normally never starts is Padelli. On defense making his return after a injury sidelined him for a few months on left back is Dalbert. In the middle is Milan Skriniar and coming back to the lineup as well is Rannochia and capping them of on the right back spot is Vrsaljko. On defensive mid is the dynamic duo tagging up once again is epic Brozovic and making his return as well Gagliardini. On the attacking side of things on the left wing is Perisic in the middle is the bull Martinez and on the right wing is Candreva. Up top is the scoring machine Icardi this is a good lineup especially moving Icardi back to a solo position. But they need to still beware Insigne on the Benevento side as he is good at scoring chances.
After the bets were made and the players took their spots on the pitch. In the first opening minutes of the half Inter were gifted a penalty from Luca which a minute later is converted by Icardi with a right footed shot and the ball lands in the lower left corner. A few minutes later Benevento get their first chance of the half as Andrea takes a shot from the center of the box but gets saved in the lower left corner of the goal. Minutes later Icardi hits the post following a header from the right of the box. But seconds later Candreva lands a right footed shot from the right side of the box into the lower left corner of the goal giving the home side the 2-0 lead. Fifteen minutes in Benevento get their second chance of the match as Andres from outside the box takes a right footed shot is saved in the center of the goal. Inter have done a great job defending the ball and keeping up with creating scoring chances and maintaining possession of the ball. After the twenty fifth minute Perisic from the left of the box takes a right footed shot which is blocked. With fifteen minutes left in the Inter dominating half Import from the left of the box takes a left footed shot is blocked. Minutes later from the right of the box Insigne takes a left footed shot is blocked. After the fortieth minute Candreva connects a left footed shot from outside the box is saved in the center of the goal. In the final minute of the half Inter add to their lead with a goal from Dalbert following a left footed shot as the ball lands in the top center of the goal. The half ends with Inter up 3-0. If Inter can keep up the pressure on Benevento they pretty much have this match in the bag.

This was a easy win for Inter despite those two allowed goals for Benevento. They did a great job maintaining possession of the ball and creating and finishing chances. Also they did a great job defending with blocking chance and saving majority of the goals that Benevento created. The man of the match is the bull Martinez who scored two goals. He did a great job with assist as well and defending the ball if needed as well. Next match is next weekend when Serie A action resumes and Inter face the dreaded team of Sassuolo. This match will also be behind closed doors after the racist chants during the Napoli match this match maybe a loss as Inter struggle to beat them but hopefully this time will be different.