Following recent success Inter traveled to take on Fiorentina. In the beginning of the season Inter won the match and looked to do the same again. Inter had a solid past four matches winning each of them and looked to add win number five and maintain their spot in third place. Fiorentina however looked to move up in the standings as they potentially could secure a spot in the Europa League next season. This match wouldn’t be an easy win but a draw wasn’t out of the question as Fiorentina are a strong side and would do what is needed to secure at least a point. Following bets and predictions the match would get underway. Seconds into the match Fiorentina would get on the board after a critical error as Devrij scored a own goal putting them up 1-0. But Inter five minutes later equalized things up once again as Vecino from the center of the box buries a wicked strike into the back of the net making things 1-1. As the half was heading towards a draw but Inter would get their first lead of the match as Politano took a shot from outside the box lands the ball in the lower left corner giving Inter the 2-1 lead. The half ends with Inter having the lead. In the second half Inter added to their lead with a goal coming from Perisic following a penalty. But Fiorentina weren’t going to go down quietly as Muriel lands one in the back of the net making the score to make it 2-3. At the end as Inter could’ve had the win but controversy would strike at the stroke of death as Fiorentina would be given a penalty which Vertout converted as we saw a point split in Florence.

In this match VAR was used in both good and bad ways. Some of the ways it was used for good was to confirm if goals were legit which they were. Others were to make sure if penalty kicks were deserved. But both of the penalties that were given were not even handballs. But they were given to the teams anyways. Especially the one that screwed Inter out of a win as the ball clealry hit D’Ambrosio’s chest not his arm. Fans and even the mangers of both clubs agreed that it shouldn’t be a penalty. Fiorentina’s manager even said “we deserved the draw but that was clealry not a penalty.” VAR continues to be both a blessing and a curse as it has it’s advantages and disadvantages. That and the refferee who ran and checked the VAR also should be held accountable for making the botched call and apparently due to his call he is not allowed to ref another Inter match until after May as he made the huge error. 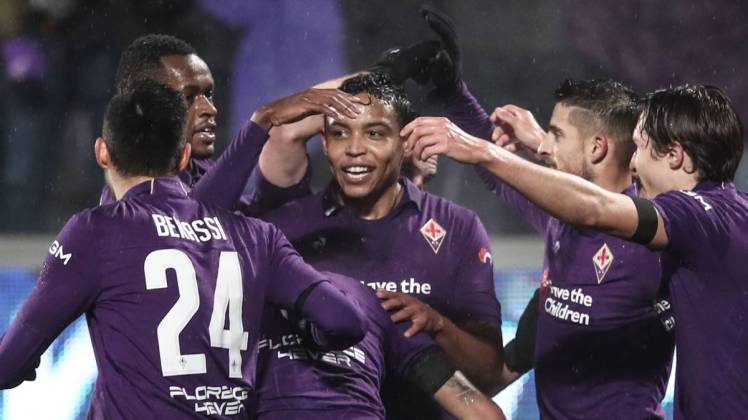 Fiorentina in this match after the third goal looked to have been down and out of this match. But they didn’t go down without a fight. They created chance after chance. They had thirteen shots compared to Inter’s eight though Inter finished more of their scoring chances. They also did a very solid job defending Inter’s chances as they blocked most of them. That or the ball would miss the goal. That and their fans rallied behind them all the way which breathed life into them. With all that it helped them comeback from a two goal deficit and salavaged a much needed point. As stated in my match preveiw they are difinately a team that you don’t want to fall asleep on because if they catch you off guard they will use that to their advantage which was clearly seen in this match. as I stated in the review “Fiorentina fought to the end to salvage a point though they even knew that it shouldn’t have been a penalty but deserved a draw none the less as they worked their butts off to earn it.”

No Icardi No Problem

As of late Inter have done well for themselves without the likes of Icardi. Icardi who was stripped of his captains band a few weeks ago after rejecting the Europa League call up hasn’t played recently due to an apparent knee injury which in the eyes of supporters is complete hogwash as there have been other factors leading to this. That and there as been drama with his wife Wanda starting trouble at the club causing friction between Icardi and Perisic. The drama as been like a soap opera. Because of him not playing is forcing everyone else on the team to step up in huge ways. Such as Martinez being put into a starting role and is showing he is capable of being the future of the club as he is scoring goals along with assist as well. That and players such as Politano and Radja have helped fill the gap as well. To be honest this is the type of squad Inter needed as they are now working as a cohesive unit instead of focusing on one player which is the thing that as killed them creativity wise as it has been just get the ball to Icardi but this is not the case now. Also this proves they can win or draw matches without him if he does end up leaving at the end of the season.