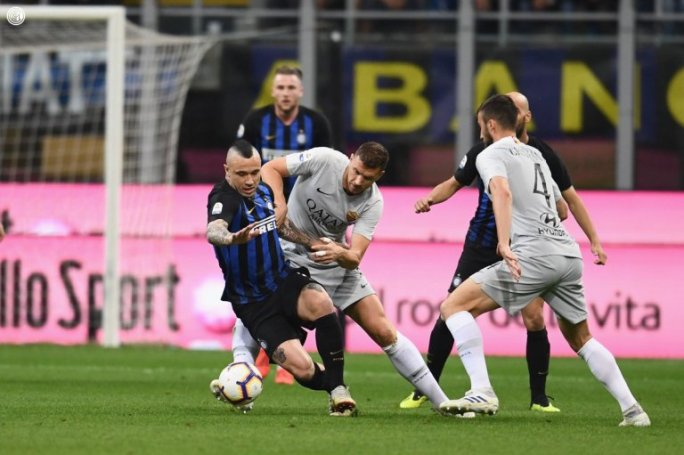 After their win against Frosinone Inter welcome visitors Roma who are coming off a win of their own against Udinese.In this match Inter will look to maintain their position in third place while Roma are hoping to secure a spot in the Europa League. The last time these two sides faced each other they played to a 2-2 draw but overall majority of their matches have ended in a draw while win wise Roma have the edge. In this match definitely won’t be an easy win for Inter but it is possible if they do a few things. They first and foremost need to finish their scoring chances along with defensively blocking Roma’s chances along with maintaining possession of the ball. But there are a few key things they can utilize while doing those things. They can attack wise use the wings to their advantage because Roma have a hard time defending in this area along with defending longshots though they attack wise are able to utilize them. They also create chances using individual skill but the downside is they are more prone to individual errors as a result. Roma however despite being able to come back from losing positions have a hard time protecting the lead if they get one. More than likely this match will end a draw but a win for either side is possible. In the first half of the match Inter took hold of the possession early on along with taking hold of the scoring chances. The half ended with Inter having nine chances compared to Roma’s four chances but fifteen minutes in Roma break the deadlock as Shaarawy finds the back of the net giving them the lead. In the second half Inter maintained the pressure on Roma in all aspects but they weren’t going to be denied points when in the sixty first minute finds the net himself but no matter how much Inter pushed and chances they created this match still ended in a draw. This makes sure they continue to stay in the top three. 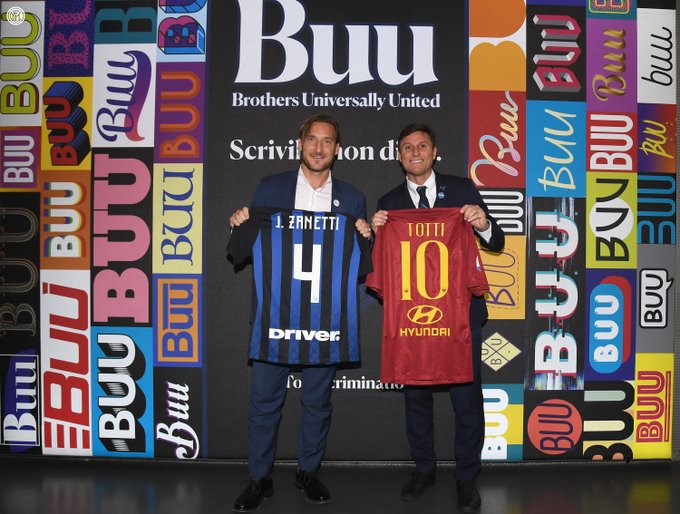 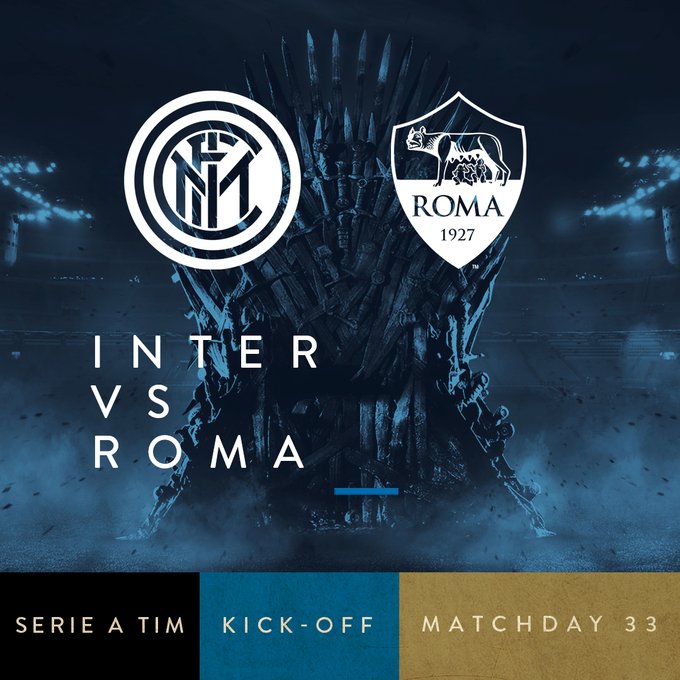 In this match both Inter and Roma will be utilizing the 4-2-3-1 formation as both side are very familiar with this setup. In goal is the captain and leader in clean sheets Handanovic. On defense on the position of left back is Asomah. In the middle is the strong duo of Skriniar and Devrij who continue to work well together. Then on the right is D’Ambrosio who needs to go at the end of the season. On defensive mid is V squared as Valero and Vecino are tagging up as Brozovic is out with injury. On the attack on the left wing is Perisic who as been struggling this season. In the middle is former Roma player Radja. Then capping them off is none other than Politano. Up top on the forward position is Martinez who is returning from and injury which sidelined him from three matches. This is a solid lineup but they need to beware of Sharrwy as he is a strong goal chance taker and finisher. 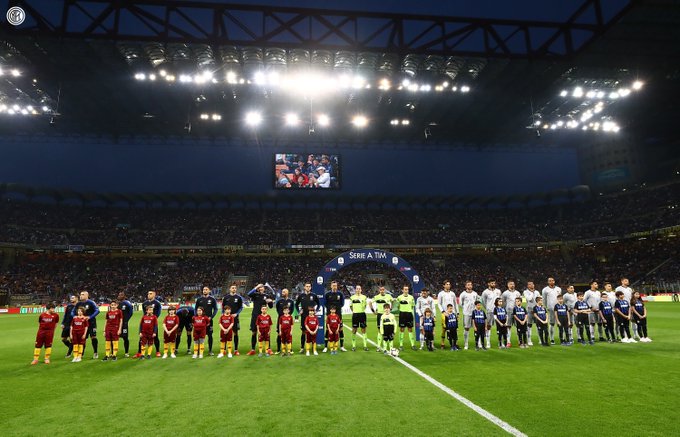 Following bets and preparations this match prepares to get underway on a late Saturday night matchup in the heart of Milan. Minutes in Roma looked to get things started off hot as Dzeko lands a shot from the center of the box but Handanovic saves it in the lower left corner. Minutes later Kolarov misses a shot from outside the box as the ball goes to the left of the goal. In the eighth minute is when Inter get their first chance of the match as Martinez following a cross from Politano lands a header which gets saved in the lower left corner. This is followed up by a shot from Perisic but his chance gets blocked. Politano seconds later from the center of the box takes a chance which is saved in the center of the goal. Inter here have taken hold of the possesssion and scoring chances. Fifteen minutes in Shaarawy lands a right footed shot into the lower right corner giving Roma the 1-0 lead. A few minutes later Radja misses as shot from outside the box as the ball goes to the left. Things would slow down a bit with no chances happening for at least sixteen minutes. After the thirty minute mark Shaarawy looks to get his second goal of the match with a shot from the left of the box but it gets saved in the upper left corner. Four minutes later Vecino takes a header which misses to the right. After the forty minute mark Asomah takes a shot which is blocked. A minute later Politano from outside the box takes a shot which is saved in the lower right corner. Seconds later Vecino gets a shot blocked from the right of the box. In the forty forth minute Inter have one last chance to get on the board as D’Ambrosio hits the post after taking a header from the left of the box with that the half ends with Roma up 1-0. If Inter don’t capitalize on one of their chances they may end up with a loss. 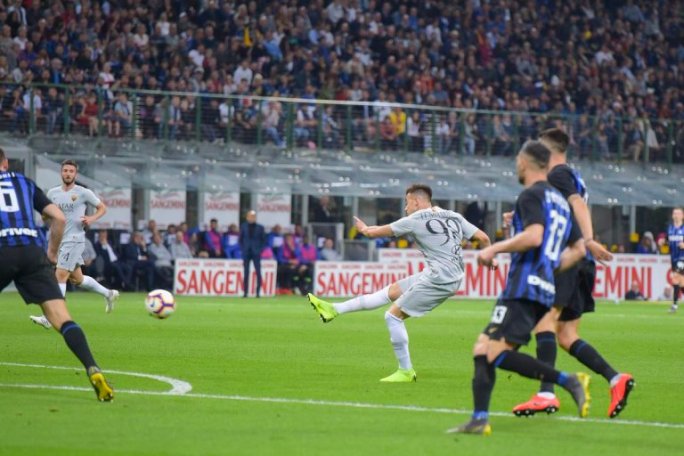 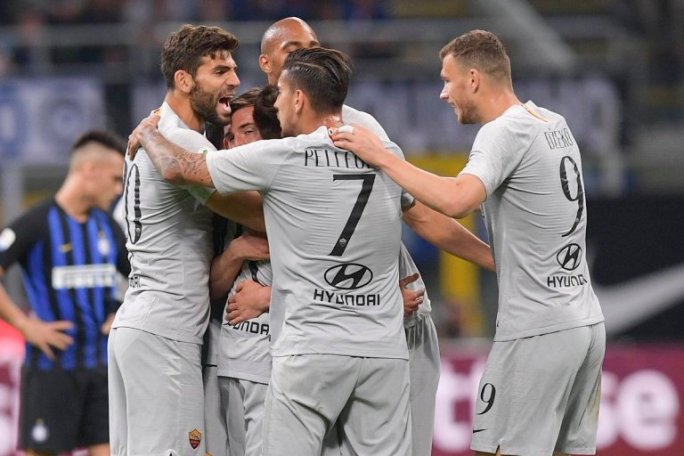 After the break this match resumes. A minute into the half Radja looks to give Inter life with a shot from the left of the box but it gets blocked this is then followed by an attempt from Perisic who gets his shot blocked as well. Martinez seconds later from the center of the box lands a header which is saved in the center of the goal. Inter are giving it all they got can they capitalize. Pellegrini looked to add to Roma’s lead with a shot from the left of the box but the ball goes to the left of the goal. In the fifty fourth minute Inter make their first subbing as Icardi comes on for Radja. Minutes later Inter bring things back on even terms as Perisic takes a header which lands in the high center of the goal making things all square at 1-1. A few minutes following the goal Perisic looks to give Inter their first lead of the match as he takes a shot from outside the box misses the goal going over the crossbar. Roma despite lack of shots have been strong with twenty one minutes left to play Martinez misses a shot from the center of the box. With now eleven minutes to go make their next subbing Mario comes on for Politano. Fazio minutes later misses a header from the center of the box. With the match coming quickly to a close D’Ambrosio gets a shot blocked from outside the box. In the final minute Kolarov would have one final chance to give Roma the victory but his attempt is saved in the lower right corner. Th final whistle blows as both sides come away with a point each. 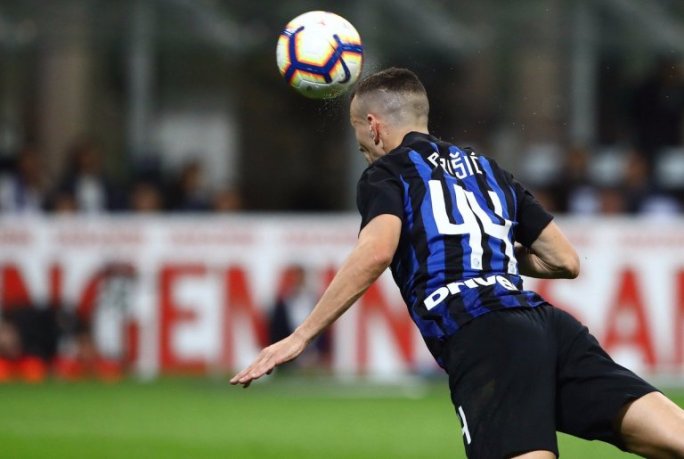 This match was a fair result could’ve been a win for Inter but nonetheless it was a fair result in the end. Inter did a great job creating scoring chances but they could’ve done a better job of finishing them. Defensive wise they did a great job maintaing possession of the ball. They also did a solid job blocking Roma’s chances. Inter did a overall solid job in this matchup. The man of the match goes to Perisic who did a great job creating chances along with assisting. He defended by stealing the ball when needed as well. In their next match Inter take on Juventus who they lost to in the start of December. A draw in that match would be the best case scenerio as Juventus are on for and have just claimed their eighth scudetto. As always until the next one Forza Inter. 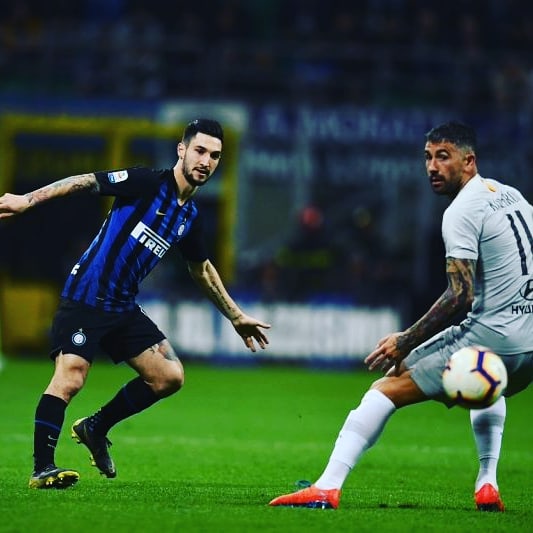