Following five epic wins in a row Inter travel to take on bottom of the table side Sampdoria. Last season Inter won the season sweep winning both their matches against them. Overall Inter have won four out of their last six matches agaisnt Sampdoria. Inter will look to make it six wins in a row while Sampdoria look to get some momentum going as they only have three points so far this season. Sampdoria have been struggling with losing and not replacing players as cost them dearly. Inter will only really need to keep an eye on those offside chances but other than that they always maintain possession of the ball along with creating and finishing chances. Defensive wise they do a great job blocking chances and stealing the ball setting them up for a strong counter attack which is one area they’ve gotten better in. Sampdoria on the other hand have the uphill battle as they will need to create and be able to finish scoring chances. Along with being aggressive on tackles and trying to take the ball from Inter this will be a tough match for them. This match should be an easy for Inter making this another win for them in their books. In the first half Inter took firm control of this match in both creating chances and possession. In this half Inter would score two goals as Alexis Sanchez finds the back of the net along with a goal from Sensi putting them up 2-0 at the half. In the second half Inter would lose a bit of their hold on the possession but seconds into the half Sanchez is sent off on a red card. Jackub ten minutes into the half gives Sampdoria a goal making this 2-1. But Inter aren’t going to let this go as minutes later Gagliardini scores making things 3-1. Despite being even on chances Inter are the ones having most of their chances on target. Inter would hold on to that lead as they win 3-1 making this six wins in a row as they sit on top of the table six matches straight. 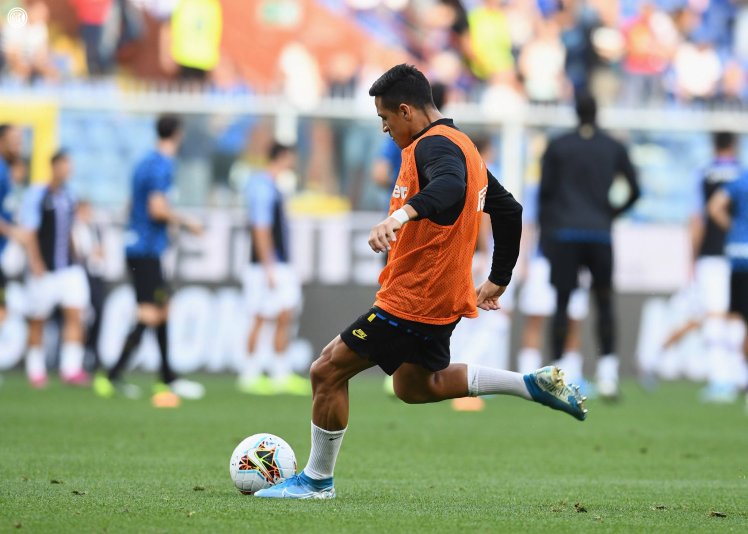 This week Inter go back to the 3-5-2 formation. In goal is key starter and favorite to win this years Gloden Glove Samir Handanovic. On the back three is the key duo of Skriniar and Devrij who have always worked well together especially in a 4-2-3-1 formation. On the left back position however getting his first start of the season is Bastoni. On the midfield player in more of a defensive midfield position are Sensi who has become a solid goal chance creator and defender also in theis position on the right is Gagliardini. On left wing back is Asomah who is showing he’s better in this position. In the middle is Brozovic who is showing life again after a struggle last season. On the right wing back is Candreva who is excelling once again. Up top is Martinez and getting his Inter debut is Alexis Sanchez who is on loan from Manchester United. This is a solid lineup but due to Sampdoria they should have no problems winning this match.

After bets were placed and final preparations the lineups were announced and this match commences. Four minutes in Jakub of Sampdoria after a cross from Rigoni takes a header but misses to the left of the goal. After the ten minute mark following a cross from Sanchez Bastoni looked to get his first goal of the season with a header from the center of the box but the shot goes to the right of the goal. Twenty minutes in the deadlock is broken after a pass from Martinez Sensi takes a shot from outside the box which lands in the lower left corner putting Inter up 1-0. A minute later Sampdoria looks to even things once again with a shot from Jakub but the ball goes past the upper left ninties. Sanchez from the right of the box lands the ball into the center of the goal putting them up 2-0 and are showing no signs of letting up. Rigoni from outside the box takes an attempt but Inter saw it coming and blocked the oppurtunity. With fifteen minutes to go in the half Jakub again looks to give Sampdoria life with a shot from the left of the box but goes over the crossbar. With three minutes to go Sensi looked to add to their lead with a shot from outside the box but it’s saved in the center of the goal, A minute later Martinez gets a shot saved from outside the box which is where Inter have taken most their chances this season.Quagliarella in the final minute of the half had one final chance to put Sampdoria on the board with a shot from the center of the box but his attempt gets blocked. With that the half ends with Inter up 1-0 if they keep this momentum going this match is theirs for the taking as they look to add another win to the victory column. 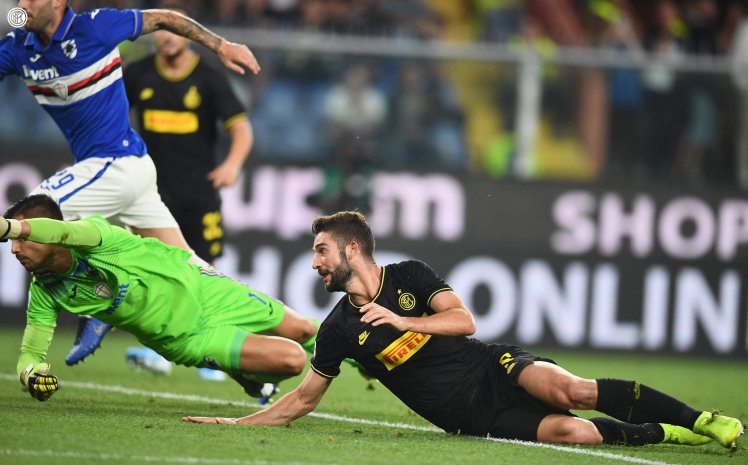 Following the break this match resumes with Inter keeping ahold of their lead while Sampdoria are looking to get back into this match. Seconds into the half Martinez from the center of the box takes a shot but the attempt is saved in the lower right corner. Seconds later after being shown a yellow Sanchez gets a second yellow card making it an immediate red card which sends him off putting Inter down to ten men. Jakub of Sampdoria takes a shot from the center of the box as the ball lands in the lower right corner of the goal making things 2-1 giving Sampdoria hope. In the fifty sixth minute Inter bring on Lukaku for Martinez. This is then followed by D’Ambrosio coming on for Candreva. Bartosz takes a shhot from outside the box but it goes over the crossbar. Gagliardini with twenty nine minutes to go in the match takes a shot from the center of the box lands the ball in the lower left corner making things 3-1 to the visitors. A few minutes later Inter make their last substitution as Barella comes on for Sensi. Bartosz looked to close the gap for his side once again with a shot from outside the box but goes to the right of the goal. Inter have lost slight hold of the possession but they are still holding on to it. Lukaku takes a header from the center of the box but it gets blocked. Vieira misses a shot from the outside the box Sampdoria are fighting to get some points from this match. With four minutes to go in the match Lukaku gets a shot saved from the center of the box. Inter at this point have the match in the preverbiale bag. In stoppage time Quagliarella looked to give them another goal but the ball misses to the right of the goal as Inter win this match 3-1 making this six wins in a row and offically making them title contenders.

This result was to be expected as Sampdoria have been really struggling to get anything going this season. If they keep down the path they’re going it is possible that we may see a club that has been in the top flight for so long get relegated which would be a sad thing to see has they’ve been in the middle of the table for seasons on end. Inter on the other hand are official contenders for the title this seasons after seeing them not beat relegation sides which are sides they’ve struggled against but they’re out there beating top table clubs as well this year could possibly be the year they see a title since their treble win since the 2010 campaign. They did a great job creating and finishing chances along with keeping up defensively holding Sampdoria at bay. Despite the red card the man of the match goes to Sanchez helping assist one chance and scoring his first goal this season he is definitely going to be a asset to the club if he is able to keep those fouls in check but other than that he shows potential in this squad. Inter in their next match go back to the Champions League as they take on Barcelona which will be a challenge for them but anything is possible. As always until the next one Forza Inter. 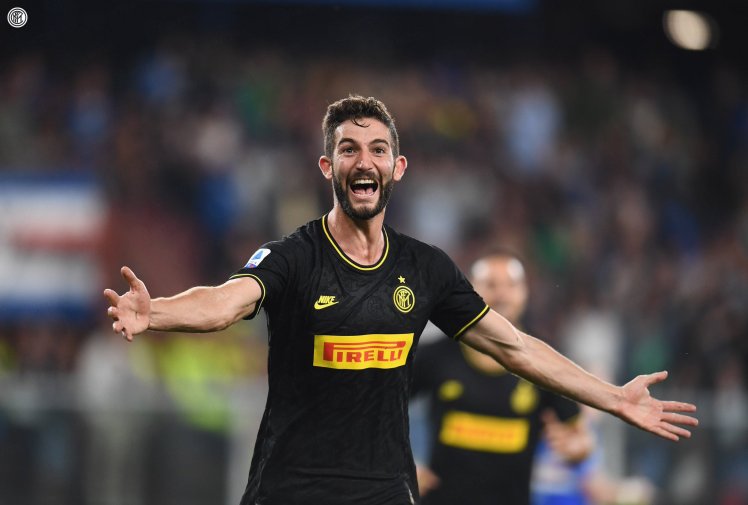