Following another international break Inter travel to take on 15th place Sassuolo. Sassuolo last match was postponed due to the loss of their president. But before the match postponing the last match they played they played to a loss as well as Inter who lost to eight time Sucudetto winner Juventus. Inter in this match will look to get back in the winners circle so as Sassuolo. Sassuolo have won four of their past six matches against Inter. As of recent seasons Sassuolo have been the preverbial kryptonite to Inter. Inter struggle to beat them especially when they are playing Sassuolo on their turf. In this match Inter will need to make sure to continue creating and finishing scoring chances. They will also need to block chances and steal the ball from Sassuolo along with keeping their chances limited. They can do this by controlling the ball in Sassuolo half of the pitch. Sassuolo in this match will look to do the same thing. Both sides are looking for a win so both of them are out for blood. In this match will more than likely end up being another win for Sassuolo based on the history of them facing each other but this is a whole new Inter so anything can happen. In the first half both sides did a solid job creating chances but in way of having shots on target the edge went to the visitors Inter. Minutes into the match Martinez putting them up 1-0 but Sassuolo wouldn’t be silenced as Beradi finds the back of the net minutes later. Lukaku would find the net twice in the back end of the half which found them up 3-1. In the second half both sides continued their momentum minutes into the second half Martinez finds the back of the net again making it 4-1. But Sassuolo looked to make a comeback as Djuricic and Boga added to their score but Inter would hold on for the three points. This is the first time in awhile that they’ve beaten Sassuolo at home which is and accomplishment and it still keeps them in the title race one point behind Juventus. 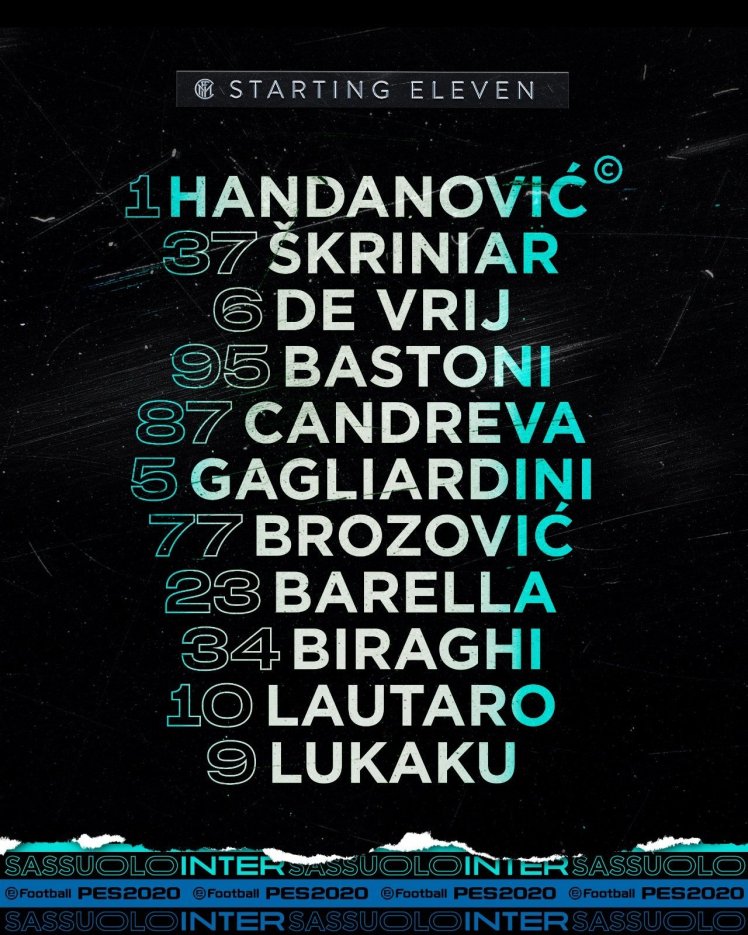 This week Inter utilize the 3-5-2 formation. In goal is none other than Handanovic. On the defense is the pairing of Skriniar and Devrij. But on left back is Bastoni who is getting his second start of the season. On the midfield on the left wing taking over for Asaomah is Biraghi hopefully the club sees more of him to see what kind of player he is. Next to him is Barella a player who as a lot to prove since he doesn’t really do much but is slowly getting better as a player. In the middle is none other than Brozovic. On the right side is Gagliardini and capping them off is Candreva. Up topis the dynamic duo of Martinez and Lukaku who have finally geled well. This is a solid lineup it’s strong and may be the winning formula to finally beat Sassuolo at home.

After final bets and preparations the lineups are introduced and this match commences. Two minutes in the deadlock is broken as Martinez after a pass from Brozovic takes a hit from the left of the box lands the ball in the lower right corner of the goal putting them up 1-0. After the ten minute mark Martinez looked to add to their lead with a shot from the center of the box but the ball goes to the left of the goal. Sassuolo a few minutes later got their first chance of the match and goal with Berardi taking the shot from the right of the box as the ball lands in the lower left corner. This made things even once again. Three minutes later Berardi looked to give Sassuolo the edge with a shot from outside the box but his shot is blocked. With seven minutes to go in the half Lukaku lands the ball to the lower left corner after kicking it from the center of the box. Before the half would end Sassuolo would give Inter a penalty which is converted by Lukaku with the ball landing in the lower right corner this ends the half with Inter up 3-1. If they mainatin their momentum and keep creating chances and holding Sassuolo off defensively this match is theirs for the taking.

Following the break this match resumes with Inter firmly in control. Minutes in both Martinez and Brozovic took shots within a minute of each other. Both shots were blocked. Martinez a minute after those attempts took a shot from outside the box but the ball is saved in the lower right corner of the goal. Candreva follows it up with an attempt of his own from the right of the box his shot gets saved in the Http right corner. Biraghi gives Sassuolo their first chance of the half with a header but the ball goes to the left of the goal. Berardi and Caputo take shots back to back and both shots miss to the left of the goal. Sassuolo after the seventy minute mark puts a foul on Barella which gives Inter another penalty shot which is converted by Martinez making it 4-1. A minute later Politano comes on for Martinez. Then minutes later Lazaro comes on for Candreva. Djuricic then takes a shot from the center of the box making things 4-2. With nine minutes to go Boga lands a shot from the center of the box which lands in the lower right corner making things 4-3. In the final minute Inter take off Lukaku and put on Vecino. With that Inter hold off for the win and still keep them on Juventus’s heels.

This result was a shock as Inter have struggled against Sassuolo for the past few seasons. But of course this Inter isn’t like Inter’s past either so things have changed. They did a great job creating and finishing chances and defending the ball as well despite Sassuolo getting three goals. They have come along way in becoming a stronger and better club. The man of the match is going to be shared this week as they both deserve it with scoring two goals each and creating and assiting chances they go to Lukaku and Martinez. In their next match is going to be in the Champions League as they take on Borussia Dortmond. This match will be tough but anything can happen as always until the next one Forza Inter.